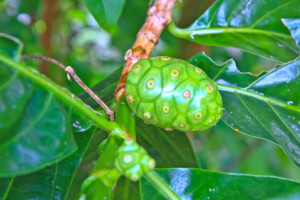 The Hawaiian Noni was brought to Hawaii by the Polynesians, who used the leaves, fruit and bark as medicine. Hawaiian Noni is a tropical evergreen tree that grows mostly in Hawaii, but also grow in Tahiti and other Pacific Islands, as well as in parts of Asia, Australia, South America and the Caribbean, they often grow along where lava flows and on the coastal areas where the salt air enhances the potency of the fruit. The Hawaiian Noni tree can grow to as tall as 10 feet and bears a fruit about the size of a potato which starts out green and ripens to yellow or white.

Hawaiian Noni was used historically to dye clothing the bark was used to dye clothing red and the root was used to dye clothing yellow theses dyes were also used as ink for the production of Kapa (bark Cloth). The juice, fruit, seeds, leaves and bark are all eaten in foods, and are also used in herbal remedies. Hawaiian Noni has certain vitamins, minerals, and antioxidants that might help repair damaged cells in the body and activating the immune system. Hawaiian Noni is also used as a moisturizer when applied to the skin to reduce the signs of aging. The Noni juice helps enhance energy and well-being due to the high antioxidants it contains, they find free radicals and neutralize the negative effects on the body slowing or postponing age related changes in the body.

Noni has been used in folk remedies for over 2000 years, and has a broad range of therapeutic effects, including antibacterial, antiviral, anti fungal, anti tumor, anti-inflammatory as well as enhancing the immune system, helping with high blood pressure and being a natural analgesic (pain killer). Hawaiian Noni  leaves can help arthritis pain by wrapping the leaves around swollen joints that ache, they can also be used for burns, sores, and wounds. For a wound that has gotten infected they would put a mixture of leaves and pulp directly of the abscess.